Too Young & Weak for Surgery

A New Peace of Mind 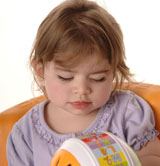 This story doesn’t begin in Phoenix, but 1,800 miles away in Henderson, Kentucky. From the time the newborn came home from the hospital, Melissa's instincts told her that something wasn’t right. There were moments when Chevelle would jerk from side-to-side. “It was like a crunching. She’d just fold herself into a ball like she was having spasms. It just went on and on,” says Melissa. But doctors continued to tell the family that everything was normal. “I finally stepped in and told her pediatrician to do something. I wanted tests done to see what was going on.”

An EEG at 6 weeks showed Chevelle, indeed, was having constant seizures. It wasn’t until after the MRI David and Melissa realized the gravity of their granddaughter’s condition.

The entire left side of Chevelle’s brain was affected with benign tumors, a condition called tuberous sclerosis. There was only one small section of her frontal lobe – about the size of a 50-cent piece – that wasn’t affected. Since Chevelle was too young and weak for surgery, they would need to wait at least another year ... if she survived that long.

Medications can control seizures in about 70% of patients. But in a case as severe as Chevelle’s, even strong anti-seizure medications likely would not control them, not to mention the possible negative side effects on a child’s development.

Her grandparents’ lives revolved around Chevelle, making sure she got her daily doses of medication and taking her to the never-ending doctor and therapy appointments. They faithfully recorded their granddaughter’s seizures, which could occur up to 50 times each day. Chevelle was also having silent seizures that were not always apparent, but doing further damage to her brain.

When the medications failed to control her seizures, Chevelle was placed on a high fat, low carbohydrate ketogenic diet, which has been successful in treating seizure disorders for certain patients. It helped at first, reducing the seizures to five or six each day. But by 18 months, the toddler was once again having up to 20 seizures per day. With no other options available, doctors in Louisville suggested a hemispherectomy, warning Melissa and David it needed to happen soon. Disconnecting Chevelle’s left side from the right side of her brain – or removing it entirely – was her best chance.

Surgery as a Last Result

Although few patients recover 100% from a hemispherectomy, and many are already developmentally delayed, the expectation is they will progress a lot further; develop language, motor, and processing skills, and get back on track developmentally. In many instances, they will begin to catch up to their peers.

Since the surgery wasn’t offered at the children’s hospital near Melissa’s home, they knew they would have to travel to another state. But first they’d have to convince someone to do it. Melissa and David had lived in Phoenix for more than 15 years before moving to Kentucky and were familiar with Phoenix Children’s. Melissa and Chevelle flew to Arizona to spend Thanksgiving with Chevelle’s extended family. While here, they scheduled a consultation at the Hospital.  They met with P. David Adelson, MD, Chief of Neurosurgery and Director of the Barrow Neurological Institute at Phoenix Children's as well as Pediatric Epileptologist and Division of Neurology Chief, Jeffrey Buchhalter, MD, hoping they would agree to perform the surgery.

“You have to weigh the risk of such a serious surgery in a small child, knowing there’s the risk of a lot of blood loss,” explains Dr. Adelson. “But in her case, the likelihood of any other treatments working, or of her having fewer seizures, was basically zero. Surgery really was her only option.”

On January 4, Melissa stayed in the Hospital’s Pediatric Epilepsy Monitoring Unit (PEMU) for 24-hour observation under the care of Dr. Jarrar, Dr. Williams and Dr. Buchhalter. Three days later, she would undergo what would be a nine-hour surgery.

Once the surgery began, and Dr. Adelson got his first look at Chevelle’s brain, he knew just how complicated the surgery was going to be. He had initially hoped to disconnect portions of her left hemisphere from the right, but there was a significant amount of blood vessels throughout the abnormal hemisphere. So he decided to entirely remove the left side rather than just disconnect it. And because of the added blood loss in such a small and sick child, he knew he would remove only a portion of it that day, staging the surgery to give Chevelle time to recover and stabilize between surgeries.

After another five-hour surgery to remove the rest of the hemisphere a few days later, the toddler spent the next nine weeks at Phoenix Children’s recovering – first in the Pediatric Intensive Care Unit (PICU) and then transferred to rehabilitation.

A Time for Family and Normalcy

After a total inpatient stay of five months, the family headed back to Kentucky. Chevelle no longer has seizures.  However, because she was so developmentally delayed to begin with, time would be needed to recover with the help of therapy. Even though she can’t talk yet, Chevelle can now communicate by making sounds and shaking her head. No longer unaware of stimuli around her, she loves music, her stuffed animals, nursery rhymes and the chocolate ice cream her grandpa sneaks to her every now and then.

“It’s incredible seeing all of the little accomplishments she has made." Melissa said. "I want to know that someday she’ll be independent and able to care for herself. We know it will take time. But now we have a lot of hope.”