Born with a deep hollow in his chest that seemed to collapse further inward as he neared puberty, Hugo Barnett suffered from asthma and struggled to breathe. Cardiovascular exercise or playing sports with his friends was out of the question. Hugo’s condition – a chest wall deformity called pectus excavatum – was restricting his heart and lungs. Hugo needed surgery.

Pectus excavatum develops when the cartilage that attaches the sternum to the ribs grows abnormally, causing the chest to cave in. Also called “funnel chest” or “concave chest,” pectus is the most common chest wall deformity and can range from mild to severe. It can make typical childhood activities like running or playing impossible, and some children can feel fatigued simply from a day at school. Without treatment, severe cases like Hugo’s can significantly restrict heart or lung function.

Since 1998, a surgical procedure invented by Donald Nuss, MD, has been the “gold standard” of care for children with moderate to severe pectus excavatum. The Nuss procedure is a minimally invasive surgery in which the surgeon makes two small incisions at the side of the chest and places one or more steel bars behind the sternum. Guided by images from a tiny camera inside the chest, the surgeon attaches the bars to the ribs and turns them to raise the sternum to the proper position. A metal plate, stitches or wire hold the bars in place. Over the next two to three years, the bars correct the shape of the chest. Then, they are removed.

Pediatric surgeons at Phoenix Children’s Chest Wall Center have performed more than 700 Nuss surgeries since it was first introduced. Our program has grown to include eight dedicated surgeons with unmatched experience and skill in diagnosing and treating pectus excavatum; in fact, three of the top five pectus excavatum surgeons in North America are right here at Phoenix Children’s and at our partner, Mayo Clinic in Arizona.

In recent years, the Phoenix Children’s team has pioneered a new approach to Dr. Nuss’ procedure – an innovation that leads to fewer complications and less risk of injury to the heart and lungs. While the traditional Nuss procedure slides a metal bar between the heart and sternum, our team lifts the sternum before inserting the bar. Raising the deep part of the chest before passing the bar lowers the risk of complications and damage to surrounding structures. We also tie the bar in place with a special material that is strong and does not fracture. In girls, we hide the incision under the breast.

Patients undergoing the original Nuss procedure require extensive pain management. Following surgery, they may spend a week in the hospital receiving epidural anesthesia to block pain, followed by several weeks of opioid medication at home. This can be especially concerning, as opioid therapy can be highly addicting.

When Zachary Weinberger learned he needed pectus excavatum surgery at 21, pain management was a major concern of his. Phoenix Children’s surgeon Craig Egan, MD, suggested cryoablation (cryo), which involves freezing the nerves beneath the patient’s ribs. These nerves are a prime source of pain after surgery, and cryo helps by temporarily shutting them off.

“Cryoablation has improved our patients’ recovery significantly. With specialized instrumentation, the pain after surgery is partially replaced by numbness,” explains Dr. Egan. “Post-op patients spend less time in the hospital and require less pain medications. This often results in patients being able to return to school sooner.”

Twenty percent of Nuss procedure patients at Phoenix Children’s go home within 24 hours, and another 60 percent are discharged the second day after surgery. All are finished with pain medication within 14 days.

“I had my bars in for three years, and it changed my life,” says Zachary. “I feel great all around. I would do the surgery again if necessary.”

Hugo Barnett’s parents made the long and complicated trip to Arizona from their home in the Cayman Islands to access Phoenix Children’s expertise. Hugo’s drug allergies made pain control a critical factor in where to have the surgery done. Cryoablation, combined with a special fiber wire (and no stabilizing bars) was a game-changer for the family in managing post-operative pain.

“Our surgeons perform more than 170 pectus excavatum surgeries per year, and our commitment to improving and standardizing the surgery has resulted in greatly improved outcomes,” says Phoenix Children’s pediatric surgeon and medical director of trauma David Notrica, MD. “Our approach is gaining traction worldwide because of our team’s dedication to sharing their insights and teaching other pediatric surgeons. And, we’re now a training center for surgeons to learn cryoablation with the Nuss procedure.”

Dr. Notrica performed Hugo’s surgery in 2018, and following the standard follow-up visit, he returned a year later for an annual exam and then communicated with Dr. Notrica and the care team as needed. His family then returned to Phoenix in 2021 to have the bar removed. 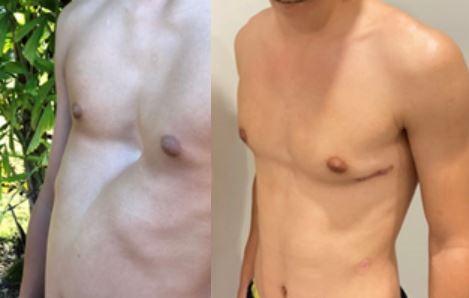 Hugo - Before and After Nuss Procedure

If your child has pectus excavatum and you would like to make an appointment with one of our medical experts, please contract Rebeca Verduzco Padilla, the Chest Wall Center program coordinator, at 602-933-0016 or via email at rverduzcopadilla@phoenixchildrens.com. For more information, contact Rebeca, or visit the Chest Wall Center at https://www.phoenixchildrens.org/centers-programs/pectus.