Chloe Newbery was just a preschooler when her parents noticed their daughter’s chest appeared to cave inward. Chloe’s pediatrician diagnosed her moderate pectus excavatum, a chest wall deformity that happens when the sternum (breastbone) is pushed inward. Because Chloe’s case was moderate, her doctor just recommended checking in every two years. Little did the family know Chloe’s condition would become severe just six years later, impacting her breathing so much that even a short hike or bike ride would leave her out of breath.

Jillian Bleak had just started high school when she felt pain in her ribs while playing team volleyball. As her training increased, her pain worsened. Eventually, even household chores or simple stretching movements caused terrible pain. Specialists at Phoenix Children’s Chest Wall Center used an innovative imaging procedure to diagnose Jillian with slipping rib syndrome – the cartilage on her lower ribs was not attached to the rest of her ribcage, allowing the ribs to slip out of position and cause pain.

Both Chloe and Jillian found the care they needed at the Chest Wall Center at Phoenix Children’s, where a multidisciplinary team of specialists provides expert, compassionate care for children with severe chest wall deformities.

Kids whose conditions interfere with their daily lives often benefit from surgery to correct the deformity and get them back to living healthy, normal lives. The pediatric surgeons who lead the Chest Wall Center are experts in diagnosing and treating many chest wall abnormalities, and the center is a destination program for children with these conditions.

The center includes eight dedicated surgeons with unmatched experience and skill in diagnosing and treating chest wall deformities. In fact, three of the top five pectus excavatum surgeons in North America are at Phoenix Children’s and at our partner, Mayo Clinic in Arizona. We also collaborate regularly with a dedicated pain management team, therapists and other specialists.

“Mum, I can breathe”

For Chloe, her family’s decision to move from Rhode Island to Arizona in 2018 proved to be life changing. “We noticed her chest defect had worsened, and our new pediatrician in Phoenix referred us to the program at Phoenix Children’s,” said Nicola. “We couldn’t believe there was a whole unit of specialists dedicated to children with this condition.”

An MRI showed that Chloe’s severe pectus had shifted her heart out of place and flattened it. Lisa McMahon, MD, medical director, Chest Wall Center, recommended the Nuss procedure, considered the gold standard of surgical care for pectus excavatum. The procedure raises the concave part of the chest to correct the deformity and allow the heart and lungs to function normally. Phoenix Children’s surgeons have performed more than 700 Nuss procedures to treat Phoenix Children’s patients. Moreover, in recent years, our surgeons have pioneered a new approach to the original Nuss procedure – one that results in fewer complications and less risk of injury to the heart and lungs.

Additionally, our surgeons often use cryoablation to temporarily freeze the nerves beneath the patient’s ribs, which are the main source of pain after surgery. In addition to greatly reducing the need for potentially addictive opioid medications to manage pain, cryoablation also results in speedier recoveries, shorter hospital stays and a faster return to school.

Chloe, who was 12 when she had the surgery, had an intense fear of hospitals and needles – even fainting on several occasions. Her parents were thrilled with her care team’s compassionate communication.

“Dr. McMahon and her team did a truly amazing job of preparing Chloe for her surgery, explaining the procedure at a level she could understand and mentally prepare herself for.” said Nicola. “My eyes filled up the day after surgery when Chloe woke up and in a raspy voice looked over at me and said, ‘Mum, I can breathe!’”

Chloe was up and walking with her physical therapist the day after surgery. Three months after the procedure, she was cleared to return to all activities. She came home and jumped on her skateboard.

“Chloe is doing great! She goes about life just like any other young, healthy teenager,” said Nicola. “Dr. McMahon is a true specialist. At a time when we felt helpless, we had absolute trust in Dr. McMahon and her team to look after our daughter. We are so, so grateful for her and the team at Phoenix Children's!”

Now 14, Chloe started a program to give whistles to Phoenix Children’s patients in case their raspy post-surgery voices make it difficult to call out for help at home. Using beads, she added words of encouragement on the whistles and put each in a bag with a little note.

Getting back in the game

After X-rays and other exams found nothing unusual, Phoenix Children’s diagnosed Jillian’s SRS using a dynamic ultrasound procedure developed by a team including Dr. McMahon and radiology specialists. During the exam, the patient performs various prescribed movements while the team observes the actions of the ribs and cartilage via ultrasound.

SRS pain can affect one or both sides and range from sharp, stabbing pain to a dull ache that lasts for hours. For mild cases, rest, ice and pain medications can relieve symptoms, but advanced SRS can be debilitating, especially for athletes. In severe cases, surgery to remove the unattached ribs and cartilage is often the solution.

“Dr. McMahon was wonderful right from the get-go. She explained our treatment options and ultimately recommended taking the offending ribs out to solve the problem,” said Jillian’s mom, Meredith.  “I was a little nervous about that, so I asked if doing some type of nerve block might resolve the pain. Dr. McMahon said it was absolutely an option and if that didn't work, we could always take the ribs out later.”

The pain management team at Phoenix Children’s administered the nerve block, which gave Jillian significant relief. However, it was short-lived. Given the choice to continue with nerve blocks or have the ribs removed, Jillian chose surgery.

Dr. McMahon removed the loose ribs and Jillian spent one night in the hospital, followed by physical therapy after she returned home. Since her surgery, Jillian has been mostly pain-free and any discomfort she has is mild. She is continuing physical therapy to strengthen her core, which should further relieve any lingering pain.

“We couldn't have had a better experience at Phoenix Children’s, from the schedulers and technicians to the nurses and surgeons. The staff is amazing and there’s not a better place to take your child,” said Meredith. “The chest wall team is not only knowledgeable, but passionate about providing great care. And that 'extra' is what helps put parents at ease as they navigate the helplessness they feel. Feeling like they loved Jillian just as much as I did was such a great feeling!”

“I am so thankful to have an amazing team to work with every day at the Phoenix Children’s Chest Wall Clinic.  From the front office to the OR staff, radiology, cardiology and the anesthesia pain service, we all work together to support the best surgical care for our patients,” said Dr. McMahon. “Having a dynamic group of physicians to collaborate with also helps us provide leading-edge care.” 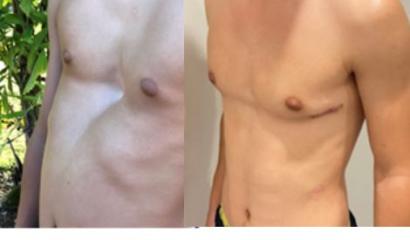