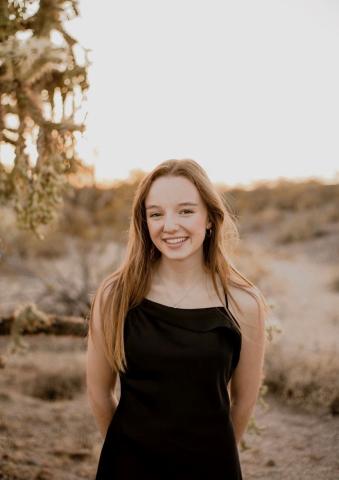 It’s a fact of life: Everybody goes to the bathroom. For Savanna Weaver, who was born with a rare birth defect called cloaca, accepting that her bathroom habits were simply different has played a huge role in helping her become a confident, optimistic source of support for other kids with similar conditions.

In female babies born with cloaca, the intestines, bladder and reproductive organs do not separate as the baby develops. Instead of having three separate openings for these organs, Savanna had just one.

“I know it sounds like it would be easier, but it isn’t,” she said, then laughed – one of the many positive ways she has learned to live with her health issues.

Savanna’s cloaca was one of a cluster of symptoms known as VATER syndrome, a group of birth defects that develop early in pregnancy. She also had hydronephrosis, a form of kidney disease in which a blockage in the kidney’s drainage system creates pressure that prevents it from functioning properly. Though her right kidney had failed, her left kidney still had some function. In addition, she was born with hip dysplasia, meaning her hips were partially dislocated.

Savanna, whose family lived in Colorado at the time, was rushed to the NICU immediately after birth for emergency surgery to create an opening for her intestines. The next several years of her life were marked by multiple surgeries that she was too young to remember. Doctors created a path from her bladder to her abdominal wall to allow Savanna to drain her urine using a catheter. A similar procedure was performed to empty her intestines, and her doctors attempted to create a vaginal opening for her uterus.

Taking ownership of her health with the Phoenix Children’s team

When she was in fifth grade, Savanna’s family moved to Arizona, where she began to receive care at Phoenix Children’s Colorectal Clinic. Her team of specialists included urologist Gwen M. Grimsby, MD, and Kathleen van Leeuwen, MD, director of the Reproductive Anomalies/Disorders of Sexual Development at Phoenix Children's, a multidisciplinary clinic that serves the complex needs of patients with congenital malformations of the reproductive system. As she began puberty, Dr. van Leeuwen was concerned that Savanna would need revision surgery for her vaginal opening, which was not adequate for Savanna’s needs. Between fifth grade and her freshman year of high school, Savanna needed multiple procedures for blockages and to fine tune her bowel, bladder and reproductive health. 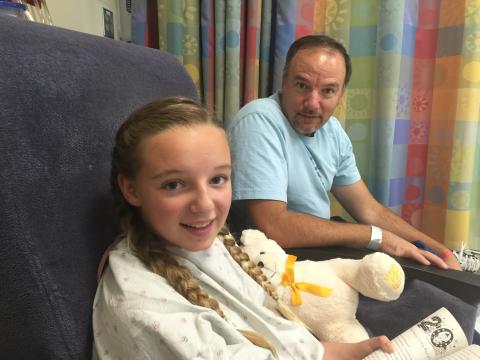 Her doctors also encouraged her to take ownership of her medical issues, including learning to fully understand complex medical terminology, so she could independently discuss her care with medical professionals and be prepared to manage her health challenges as she moved into adulthood.

With her mom, Cindy, at her side, Savanna began completing her own medical paperwork and asking questions during her appointments. She also started attending events with others who had similar conditions and found sharing her story helped her become comfortable discussing her own health issues and gain confidence. It was at one of these events that Savanna met a girl who would become one of her closest friends.

“She was a huge support for me,” said Savanna. “She had already had some medical procedures I needed and vice versa, and we helped support each other.” The young women and their parents shared their experiences in this video.

Through Phoenix Children’s, Savanna attended a Youth Rally camp, where she noticed a lot of the kids seemed overwhelmed by their medical issues and had a hard time talking about them.

“That is totally understandable because it is overwhelming,” Savanna said. “But if you take it one step at a time you slowly become more comfortable and confident in yourself. Just talking to others about their stories is empowering for them and for me. I just want to be there for people who need support.”

Savanna credits her team at Phoenix Children’s with helping her build confidence and put her experiences to work to help other kids with similar conditions. “Our team realized that Savanna was very gifted at putting other patients at ease and we regularly ask her to meet with families who are going through the things she and her family went through,” said Dr. van Leeuwen.

“One thing Dr. van Leeuwen told me when we first began talking has always stuck with me,” said Savanna. “She told me, ‘No one is normal. There is not a single person who didn’t go through something or have something going on. Everyone has something, even if it isn’t on the outside.’”

Like so many kids with medical issues, Savanna has been ridiculed about how she goes to the bathroom or the “weird things” in her backpack.

“A lot of people are just afraid to talk about it,” she said. “But everyone goes to the bathroom. I just do it differently because I was born that way. And I have guy friends who think it’s funny that I can pee standing up.”

Savanna still experiences complications related to cloaca. Last year, she developed a severe form of colitis (inflammation of the colon) that typically affects older people. Her team collaborated with Phoenix Children’s gastroenterologist Ricardo A. Medina-Centeno, MD, medical director of the Neurogastroenterology and Motility Program, to diagnose and treat Savanna.

While she was waiting for a diagnostic test, Savanna met a patient named CM, age 12, who was having a similar procedure. CM had a long list of complex health issues and felt understandably anxious and overwhelmed. Savanna talked with CM about her own experiences and how helpful it was to open up about her condition with her friends.

“She asked me how I talked to my friends about it, and I told her I started with my kidney problems,” said Savanna. “As you become closer to that person you can tell from their reaction how they will react to other things. But if they aren’t accepting of your medical history and your life, don’t get close to them. It’s not necessary to be friends with people who aren’t accepting of the fact that you were born differently. And that was one of the hardest lessons I’ve had to learn.”

Savanna let CM watch her go through the procedure, then stayed with CM when it was her turn. They have remained in contact since that day.

Savanna currently works as a nanny and homeschool teacher, and attends college online. She loves being in nature, camping, mountain biking and weight training. She looks forward to having a family.

“I can’t be as active as the average 20-year-old, but honestly, there’s not much I can’t do, and I’m still killing it in life,” she said. “I definitely think I would not be as confident and empowered about my medical stuff if I wasn’t at Phoenix Children’s. “I was born differently, but that has given me experiences and opportunities to help others.”

Dr. van Leeuwen gives full credit to Savanna and her parents for her success and said, “We can’t teach that level of resilience. It comes from somewhere within them. We have benefited from Savanna and her folks and their generosity in wanting to help other families.” 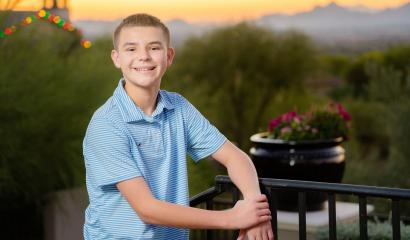 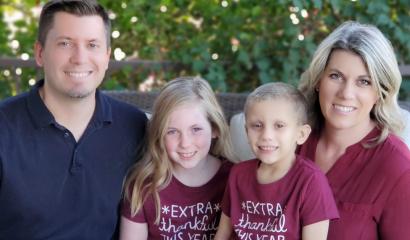 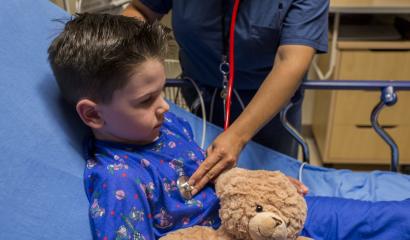