Not a Normal Headache 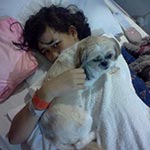 During the summer of 2012, Ellie, a healthy 10-year-old girl began complaining of mild headaches. Her mother was not concerned and Ellie wasn't complaining enough to give her medication. Ellie's parents thought she was spending too much time on the computer. Even when she started waking up in the mornings with headaches, they didn't think there was much cause for alarm. After a visit to the pediatrician and a prescription for antibiotics for a sinus infection, her parents were given instructions from our doctor to come back if the headaches continued after the course of antibiotics was completed.

In the early morning on Sunday, October 1st, Ellie woke up with excruciating headache pain and was vomiting. Her mother gave her ibuprofen and Ellie managed to fall back to sleep. Later that day, her pediatrician ordered an MRI. Ellie's headache had abated somewhat, but she still didn't feel well and was vomiting quite a bit. The next morning she was still vomiting and had a slight headache, so her mother kept her home from school to rest, assuming that she probably had a migraine.

On the morning of October 5th, Ellie had the MRI. As time went on, the MRI became more and more complex, more tests were ordered. Before they left the facility, they received a call from Ellie's pediatrician, giving the news no parent wants to hear. To her family's horror, Ellie was diagnosed with a 4 cm brain tumor. She was admitted to the Phoenix Children's PICU that same day where we met with neurosurgeons and oncologists who told us she would be undergoing a five hour brain surgery on Monday.

Ellie was admitted through the ER and spent the next three nights in the PICU where she was encouraged to have a party since the upcoming week would be difficult and traumatic for her. Saturday was spent entertaining her friends, a constant stream of visitors, gift deliveries and nail painting! Ellie felt like a rock star, and her room was decorated by Child Life with posters of One Direction, streamers, balloons and bright colors. Many doctors, nurses and hospital workers came by her room on the seventh floor to see what everyone had been talking about as she became so famous that week and was known as "the healthiest kid on the floor" for a couple of days!

On October 8th, Ellie was prepped for surgery and placed under anesthesia in the morning for her pre-surgery PET scan. In total she was under for approximately eight hours. Dr. Bhardwaj was able to remove her entire tumor, and when she came back to her room, while she was in tremendous pain, she was talking and moving voluntarily which made her family all breathe sighs of relief.

"The nurses and surgeons kept us apprised of Ellie's condition throughout the surgery and again, we felt continually supported during the entire ordeal," Ellie's mom said.

In total, Ellie stayed seven nights in the hospital. Three weeks post surgery, she was back at school! Ellie started radiation treatment shortly after and her first post treatment scans were mercifully clear of disease.

"We are so thankful to the staff and doctors at Phoenix Children's for their care and concern for Ellie's treatment," Ellie's mom said. "We are confident we could never find a more dedicated and competent team for the situation that we found ourselves in."

Ellie will continue to be monitored for the rest of her life, but for now, apart from a large scar on the back of her head, Ellie shows no signs of what she has so recently been through.